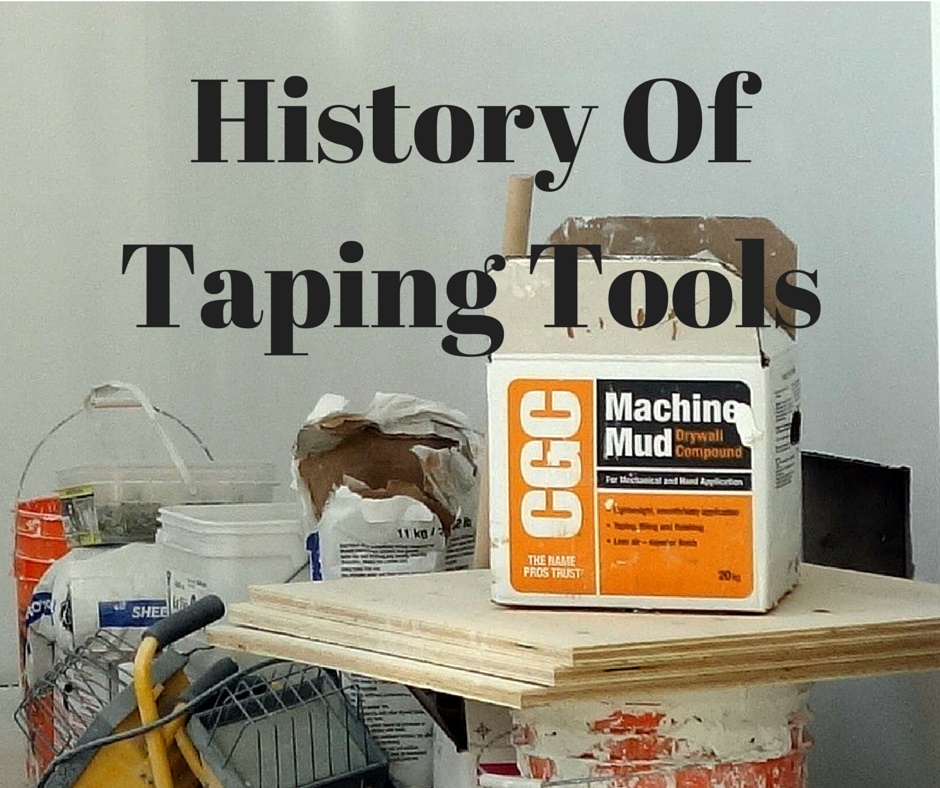 Here is a short history of automatic drywall taping tools in Toronto, GTA and all over Amerca.

In 1939, brothers Robert and Stan Ames started experimenting with new ways of finishing drywall in Georgia. They were painters and plasterers who came up with the Corner Shoe, which was the first of a long line of drywall tools. The Corner Shoe applied joint compound to seams using air pressure and a long hose. Ames brothers came up with the pre-curser of today’s Bazooka (automatic taper) in 1945. This first taper was battery powered and weighed more than 100 pounds when fully loaded. In 1951 Ames brothers introduced the first drywall boxes and nail spotters. In 1954 the automatic taper was invented by Robert Ames. The Ames brothers sold their company, Belmont Manufacturing of San Carlos California and its patents for $5.2 million dollars to Bliss and Laughlin Industries from Illinois in September of 1962. The company was renamed Axia Incorporated in 1982. In October 1984, Axia was acquired through a leveraged buyout by affiliates of Merrill Lynch & Co., Inc., certain members of senior management, and other investors.

Tape Tech Tools had been operating from Redmond, Washington. In 1982TapeTech joined with Axia. TapeTech Tools and Ames Taping Tools Systems are wholly owned subsiduaries of Axia. Axia is a subsidiary underAmes Holdings. Ames Taping Tools were primarily involved in the rental and servicing of drywall tools. Tape Tech markets and sells the Ames drywall tools in a golden colour. Ames was in bankruptcy filing in December, 2009 for Chapter 11 protection with a debt of $161 million. In July 2010 they were converting to Chapter 7 liquidation. They have re-surfaced and still renting and selling tools. Ames is headquartered in Duluth, Georgia

Columbia – Columbia Taping Tools got its start in 1979 when Bernie St. James was involved in Nanaimo Tools then Tornado Tools. Bernie was making tools out of his garage on Vancouver Island at Columbia Beach (near Parksville) and changed the name to Columbia Taping Tools. They are now based out of Surrey, B.C., They are a family run business and make some of the best tools in the drywall business. Columbia also makes a wide variety of drywall tools for Marshalltown and more recently a taper for Wall Tools.

Drywall Master – Larry D’Souza founded Tapemaster Tools in 1980. He later formed Drywall Master in 2000. With the company is Larry’s son Sunil D’Souza and Robert “Johnny” Payne who started with the Ames Brothers. Drywall Master is headquartered in Chicago, Illinois and continue to produce quality tools.

Concorde Taping Tools, (Concorde Tools Corp.) Surrey, B.C. was owned by Donald Mark MacMillan, an inventor and former drywall finisher and Raymond Bernier. LFD Industries (Yee Bun Lee, David Fung and David ****) purchased Concorde in June 1990 and kept Macmillan on as a consultant. Macmillan left Concorde in 1997 and formed Northstar in December 1997with Mr. ****. Concorde sold the patents on their red tools to Ames in 1999.

NorthStar Tool Corporation – The first tool Mark Macmillan built was the AdjuStar extendable flat box handle, acknowledged to be the “state of the art” in adjustable handles. The first Northstar AdjuStar was sold in March of 2000. Their products were a metallic green in colour and they were British Columbia based. In 2007 Northstar affiliated with ToolPro and their tools are no longer being made.

Drywall Tools Inc. out of San Carlos, California was started by many of the inventors of the original drywall tools at Ames and later became Premier Taping Tools.

Premier Taping Tools was based out of Stockton, California and started by Robert Ames, Stan Ames and Carl Raff in 1974. They developed what became know as the “Blue Tools”. The company was acquired by Axia and then shut down. The Premier tools became the basis of the TapePro andBlueLine tools.

TapePro Drywall Tools – Stewart Orchard started this company in Australia in 2001. Stewart is a son of Graeme Orchard, owner of Wallboard Tools in Australia. Stewart had worked for some time at Premier Taping Tools.

Wilco Drywall Tools – Established in 1985 with Willis Trout in Pennsylvania.

In the video below you can see how our professional drywall tapers use simple taping tools to mud drywall for one of our recent projects in Toronto.

If you have any questions about your next drywall project, send us an email atinfo@drywalltaping.ca or give us a call 647-866-0201